Georgia Secretary of State Brad Raffensperger said Wednesday that an upcoming post-election audit of the presidential race will effectively be a manual recount of nearly 5 million ballots.

“The chance that a margin of 14,000 votes will be altered is about as close to zero as you get,” said David Becker, the executive director of the Center for Election Innovation & Research. “Audits in general are designed to confirm the counts and technology reached the right outcome.”

Instances of statewide recounts altering the ultimate outcome of a race are extremely rare. Since 2000, there have been 31 statewide recounts nationwide, with the average recount changing margins by only 430 votes, according to the election reform group FairVote.

Raffensperger, whose fellow Republicans have lobbed unsubstantiated accusations at his administration of the 2020 election, announced that he will designate the presidential race as subject to a risk-limiting audit, a post-election procedure that examines statistically meaningful samples of ballots to authenticate the vote tally. Raffensperger’s office has also said multiple times that there have been no irregularities in the vote-counting process beyond a few instances of human error that were promptly corrected.

While Georgia, like most states, has laws mandating post-election audits. But in 2020 it has been piloting risk-limiting procedures, which are designed to check the fewest number of ballots based on the margin of the race under review. The smaller the gap between two candidates, Becker said, the bigger the sample needs to be.

“If you’re doing a risk-limiting audit of California” —  where Biden currently leads Trump by a nearly 2-to-1 margin — “you may only need to look at a few hundred ballots,” Becker said. “But within a few thousand, you need to look at nearly all of them.”

Between the tight margin between Biden and Trump’s unofficial vote totals and the Trump campaign’s litigiousness, Georgia was already likely to see a recount. But the state’s 159 counties will face a tight timeframe to recount their ballots in order to meet the state’s Nov. 20 deadline for certifying vote tabulations, which Raffensperger said he expects to meet.

“It’ll take every bit of the time we have left, for sure,” he said at a press conference.

Becker said the nine-day window before the certification deadline said that larger counties, especially those around Atlanta, may need to work around the clock.

“I certainly hope they’re right about how quickly this can be done,” he said. “There are real concerns about delays and official results, frankly from people across the political spectrum.”

But Becker, who advises several states — including Georgia — on their election procedures, said the ballot-inspection process should be relatively straightforward. The 2020 election was the first election in many years in which Georgia will have paper records of all its ballots, following the introduction of new $107 million system of voting machines that combine touchscreen interfaces and paper receipts that show plain text and a scannable barcode.

While election security advocates have argued that Georgia’s ballot-marking devices, manufactured by Dominion Voting Systems, are not as trustworthy as hand-marked paper ballots, Becker said election workers conducting the audit will be looking at the text on the paper records.

“They’re going to look at the human-readable part,” he said. “There’s no ambiguity there. It will either say Biden or Trump (or a third-party candidate).”

The Georgia audit, like other steps in the post-election period, will be conducted in the presence of observers representing both the Biden and Trump campaigns. Becker said county officials will need to make sure those observers have access to the recount, but follow laws about their conduct.

“It’s going to be really important to maintain order and process in those rooms and not allow anyone to derail the process or inject themselves into the process,” he said. “This is a process that should be done by election workers and of course it should be done transparently.” 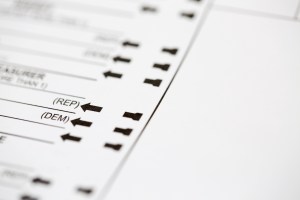