Georgia Gov. Brian Kemp on Wednesday announced the state will distribute more than $234 million in broadband infrastructure expansion grants to internet service providers, with the goal of connecting upward of 76,000 addresses in some of the state’s least-connected communities.

State officials estimate Wednesday’s grants will connect 76,000 homes and businesses to high-speed internet, representing an estimated 15% of locations across Georgia that currently lack broadband access. A second round of funding will open up later this year for a group of five counties that missed out on this round, Kemp’s office said.

“These projects announced today will go a long way to helping Georgians in some of the most unserved and underserved parts of the state become better connected,” Kemp said in a press release.

The 12 ISPs that received grants this week include major national providers like Comcast, and smaller, regional businesses. Each of these carriers has agreed to participate in the Federal Communication Commission’s Affordable Connectivity Program, which provides monthly subsidies for low-income households to cover their internet bills. 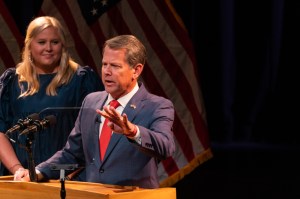