How can one tell if someone is doing a “good job” in their job?

When presented with this problem recently, Nebraska Chief Information Officer Ed Toner said the answer is simple and found in numbers. Toner is one of a few state CIOs who regularly publishes his agency’s performance measures, including the percentage of service requests filled each month and the uptime of services, such as email, core network and radio communications.

Toner said the reports are motivational because his employees know these numbers are public, even if they’ve had a bad month. Though judging by the available data, there hasn’t been one yet. To an outsider, this seems more reliable than simply asking someone directly how they’re performing, but also incomplete — understanding the full shape of one’s work requires more than a few numbers.

Vermont CIO John Quinn, who also publishes some of his agency’s performance measures (other state agencies give it a B+ for customer satisfaction), said data is not only a helpful way to judge the performance of an individual leader or agency, it’s the only way for an administration to effectively track its goals.

But how can one be sure any given number is meaningful? Quinn said he’s judged by how well he’s completing the tasks that were assigned to him when Gov. Phil Scott appointed him to the job in 2017.

“We came from a distributed IT model and my job was to build this agency and streamline IT services and start to reduce the overall technical debt,” he said. “When you look at our strategic plan, it has specific measurements. Was I able to close down the data centers I said I was going to close down? Was I able to reduce the inventory of applications from 1,400 to 1,100? Was I able to actually make meaningful change? And I think those are measurable.”

But numbers don’t capture every nuance. For state CIOs in particular, the challenge of judging performance is further complicated by the role’s rarity: There are only a 50 state IT chiefs and they can’t be fairly compared because their operating environments each come with unique constellations of political pressures, legal boundaries, cultural forces and organizational histories.

Few have thought more about this topic than Doug Robinson, a former Kentucky technology official and executive director of the National Association of State Chief Information Officers. He said of the hundreds of state CIOs he’s known, the best share a few common characteristics, few of which are related to technology.

NASCIO’s 2018 survey of its members revealed that the role of “technologist” ranked ninth in list of 10 roles that state CIOs assume. Topping the list were “communicator,” “relationship manager,” “strategist,” motivator” and “diplomat.” An effective CIO, Robinson said, is someone who knows how to “navigate the pirate map” of state government and then execute on a plan that perhaps not everyone will be thrilled with. “People resist change” is a common maxim.

“The discussions that state CIOs have are more about people and money than technology,” Robinson said. “That’s someone who can negotiate, articulate the value proposition, not someone who’s fully immersed in the bits and bytes. They’re marshaling resources and building relationships.”

State CIOs are sometimes called on to testify before lawmakers and explain why they’re asking for more money or why some decades-old system is failing. Robinson said he’s had new CIOs approach him, distressed, saying they didn’t know the job entailed more than simply running the state’s technology and that they would have thought twice about accepting if they had known.

According to NASCIO’s data, the median state CIO sticks around for about two years. Many of the CIOs on the left side of that curve leave their jobs because they don’t want to operate within an unstable or uncooperative political environment. CIOs have churned in Alaska, Florida, Nevada and elsewhere.

Florida has reorganized its technology agency several times within the last decade amid disagreements over how much authority IT officials should wield. (It’s currently called the Florida Digital Service, under the Department of Management Services, and headed by former State Rep. James Grant, who helped create the new position and set its salary.)

‘Don’t get mixed up in all the politics’

It’s rarely about technology. Robinson said CIOs fail individually when they neglect to optimize their business models, focus on “bright, shiny objects” or ignore their customers. But perhaps the deadliest mistake, he said, is “outrunning the headlights of the governor.” That doesn’t mean CIOs need to be hyper-political, but the ones who disregard political norms don’t last long.

Robinson named Mark Raymond, who’s been Connecticut’s CIO for the past 10 years, as a CIO who’s aware of the political environment, but has succeeded by focusing on his work.

“Mark’s a humble guy, “ Robinson said. “He stays humble and he delivers, but he listens, he thinks about things.”

He also pointed to former Tennessee CIO Mark Bengel, who spent 13 years as a chief technology officer or CIO. Robinson said Bengel lasted that long by living by the mantra “don’t get mixed up in all the politics, just stay humble and keep kind of a low profile.”

That doesn’t mean CIOs can’t push the boundaries of what technology can do in their states, he said, citing former Utah CIO Mike Hussey as an example of an innovative but diplomatic IT leader. Hussey pushed for greater use of automation and cloud technologies in Utah, often ahead of other states.

Many state CIOs join government from the private sector, viewing even a brief stint as a respite from the more lucrative, but less fulfilling corporate world. Some of the longest-serving CIOs, upon their retirements, have admitted being surprised that they stayed as long as they did.

Robinson said that happens because the role of state CIO provides an opportunity to do good on a scale found in few other technology jobs. Many who stick around find themselves members of a lifelong club — NASCIO’s recent conference in Seattle attracted 24 former state CIOs who wanted to see their old friends, Robinson said. 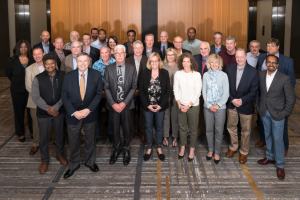 What makes a good state CIO?