The Commerce Department on Wednesday announced a total of $77 million in new grants to tribal governments across the United States.

The 19 awards are being distributed through the National Telecommunications and Information Administration’s $980 million Tribal Broadband Connectivity Program. In the latest round, Alaska’s Federation of Natives was awarded roughly $35 million, which is to be distributed to its 73 tribal nations.

According to the NTIA, the federation plans to use the funding to subsidize broadband service, offer digital skills and workforce training and improve access to health care.

“For far too long, Tribal Communities have been cut off from the benefits of high-speed internet, as well as the associated economic benefits that come with it,” Commerce Secretary Gina Raimondo said in a press release. “From running a business to taking online classes to scheduling a doctor’s appointment, the internet is a necessary tool for participating in our modern economy, and it’s an absolute injustice that this resource has been deprived from so many Native Americans across our country.”

The other grants in this round were awarded to tribal governments and organizations in nine other states, including Arizona, California, Connecticut, Louisiana, Michigan, Oklahoma, Rhode Island, South Dakota and Washington. Common concerns cited by those recipients included access to education, telework, remote learning and health care.

The $980 million Tribal Broadband Connectivity Program, which was initially funded in late 2020, is set to grow by $2 billion under last year’s infrastructure law, which contains $65 billion in overall broadband funding.

Alaska, which is the largest state geographically but has one of the smallest populations, has long struggled to connect many of its residents. Building infrastructure across its icy expanses has proven expensive and technically onerous.

Many tribes elsewhere have likewise struggled to connect their residents in regions that are often underserved by private industry. 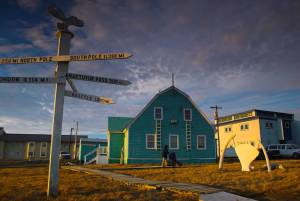