Emergency dispatchers directing first responders in the nation’s largest metropolitan areas will soon have another tool at their disposal, after the Federal Communications Commission voted to require more detailed location data from wireless providers.

The new rules, adopted by the FCC on Friday, will require wireless providers to share the “vertical location” of 80 percent of their emergency callers, within a range of about 10 feet. The idea is to allow dispatchers to determine on which floor of a building an emergency is occuring. National carriers or carriers that operate in major metropolitan areas must provide vertical location data for the 25 most densely-populated metropolitan areas by April 2021; providers must provide vertical data for the 50 most densely populated areas by April 2023.

The order marks the latest step in the FCC’s effort to update the country’s emergency management systems. The vertical data-sharing requirement will be enacted as states update their analog systems to digital ones — called next-generation 911 systems — capable of  providing dispatchers with more precise location data of callers using mobile phones.

“By limiting our efforts here, too many people in too many places—especially in rural America—will never see the benefits of any policy designed to provide a caller’s vertical location,” Rosenworcel wrote in her partially dissenting opinion, citing rural town homes, office parks and other multi-story structures outside of urban areas that vertical location data won’t be gathered from.

Rosenworcel also criticized the FCC’s lack of clarity around how the vertical data will be formatted. Because the data only reflects the vertical coordinates of caller location, it won’t be easy for dispatchers to determine the caller’s floor, especially in time-sensitive situations, she said. Friday’s vote offered no details as to how such a conversion would be done.

“When calls come tumbling in to 911 in a crisis, the operator on the other end of the line is supposed to figure out where you are because they have a string of numbers representing raw height above ellipsoid data that reflects coordinates measured from the center of the earth’s mass. Let’s be clear: this data is not meaningful,” Rosenworcel wrote.

Instead, she said, the FCC has left 911 call centers to convert the data themselves.

“That’s a huge assumption and a glaring hole in the policies we adopt today,” she said. “Do public safety officials in every town, city, county, and state have the budget to do this? How much will it cost? Who will pay for it? Is it even possible?”

But FCC Commissioner Geoffrey Starks said this is only meant to be “a step in the right direction, not the final one.”

“The three-meter metric we adopt today will get first responders close to those in distress but, as I have noted in the past, floor-level
accuracy is needed to ensure they get to the right place every time.”
from

Commissioner Brendan Carr wrote in his opinion that the FCC shouldn’t wait any longer to implement the new rules, even if the technology isn’t perfected yet.

“Everyone wants to press the technologists and inventors to make that data more and more precise,” Carr said. “Today’s item gives us a choice. Do we send the best height information that’s technically possible to first responders now, or do we wait until better height information is available later? I, for one, don’t think we should wait.”

In a brief, the FCC said it would continue to work on establishing a long-term deadline for wireless carriers to provide specific floor levels for emergency callers.

Additionally, the order limits the use of 911 call information to only be used for 911 purposes, an important step for the agency that’s seen caller location data sold on the black market for years. 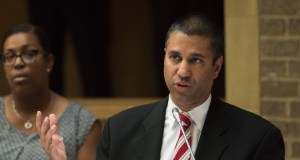