A consortium of government, private-sector and university interests have come together to help protect the security of the nation’s critical public infrastructure, organizers announced Friday.

Starting in Washington state, the project — called the Public Infrastructure Security Collaboration and Exchange System, or PISCES — is a reboot of a Seattle-area project that lost support in 2013, and has been brought back to life, expanded to include not only cross-sector monitoring of local government’s most essential infrastructure — 911 systems, public safety communications, water treatment facilities, and so on — but also to build a workforce development and research ecosystem.

The announcement was made by Critical Informatics , an IT security and consulting firm founded by Michael Hamilton, a former Washington state and Seattle city government employee who led a previous incarnation of the program called the Public Regional Information Security Event Management System, or PRISEM . That program ran out of grant funding, and making subsequent progress became too difficult from within government, Hamilton told StateScoop, which is why it’s now being led by a private company.

“It ended up being absolutely impossible to work within the politics of the state to do that,” Hamilton said.

But now having gained the support of venture capitalist Alan Frazier, founder and chairman of Frazier Healthcare Partners, a Seattle-based private equity firm, Hamilton says the project is showing promise as university and government organizations from around the country express interest in a national expansion.

“We’re doing this for down-market local governments,” Hamilton said. “It’s water purification, waste-treatment, communications for law enforcement, emergency management, traffic management — all the stuff that cities and counties do that if they’re disrupted, you’re going to feel it on the scale of your life. Not a news story about ATMs are down, not a letter from a credit card company — it’s ‘my kid stopped breathing, I called 911 and it didn’t work.'”

Hamilton says the regional consortium is now “completely operational” — it includes a partnership with Western Washington University (of which Frazier sits on the board of trustees) to integrate his company’s cybersecurity event monitoring technology into university cybersecurity training programs.

“Analysts are being trained not with books and exercises, but they’re sitting in front of live fire,” Hamilton said. “So we get infrastructure protection from that, we get workforce development, we get opportunities for research.”

Hamilton said the potential for a new national network of information sharing and analysis organizations is in talks now, with support from the Department of Defense.

“Now that we are operational again, everyone is looking at us again and wants us to be part of something bigger,” Hamilton said. “If we can push this model across the country, suddenly we have radar for infrastructure disruption and we’re creating practitioners at a far greater rate than we were before.”

National collaboration is enabled through a nonprofit. Hamilton said he’s happy to share the recipe with other states on how to execute similar regional collaborations elsewhere, but his hope is to keep all of them under the same nonprofit for the purposes of consistency and resource sharing.

“The original impetus is that local governments do not invest until something blows up in their face and then they over-correct,” Hamilton said. “That is not where we want to be. We want really good telemetry out there so if there’s doorknob-twisting going on and somebody’s going to go for the lowest hanging fruit, which is local government to disrupt critical services, we see that coming.” 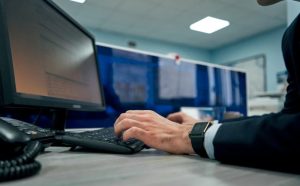