California Gov. Gavin Newsom on Wednesday announced 18 broadband infrastructure projects to begin building an open-access network across much of the state.

Newsom’s office said the network will be state-owned and serve as “middle-mile” broadband infrastructure, meaning that it will connect local networks in underserved areas to high-speed service providers far away. Each of the 18 projects are lined up to provide infrastructure to parts of the state that authorities know are either currently unserved or underserved by broadband.

The projects are set to be funded through a $6 billion investment into last-mile and middle-mile broadband that Newsom signed into law in July, though only $3.25 billion of is dedicated toward the middle-mile network, with the remaining $2.75 billion going toward local governments, nonprofits and last-mile connectivity projects. The intent is to eventually provide funding for projects that provide internet to at least 98% of Californians, and the law requires all of the projects, including those that haven’t been announced yet, to be approved and funded by 2027.

The California Department of Technology has released a map of the initial projects, but more are expected to be planned in the near future, said Martha Guzman Aceves, commissioner at the California Public Utilities Commission. California’s broadband availability was found to be highly stratified by income and race in a survey published by University of Southern California and California Emerging Technology Fund researchers this year. More than a quarter of the state’s low-income residents lack any access to the internet or are only connected via a smartphone, while higher-income households enjoy “near universal adoption.”

“These initial routes have been identified to accelerate projects in areas of the state that are unserved because of the lack of open middle mile infrastructure to serve them. We are accelerating the selection of a diverse set of routes — those that are ready to build and those that are not ready to build,” Aceves said in a press release. “This allows the state to partner with locals on these diverse projects and learn by doing, as we concurrently work to finalize all the needed routes in the State.”

The initial list of infrastructure projects throughout the state is the result of a collaboration between the California Public Utilities Commission, the California Department of Transportation and the California Department of Technology, as well as a third-party administrator called GoldenStateNet that’s in charge of managing the development, construction and maintenance of the middle-mile network. The initial list of projects covers a wide range of geographies throughout California — including mountains and deserts — and should require several different technologies to complete, the governor’s office said in the press release. 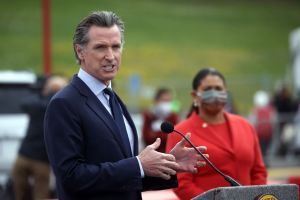