“Somebody’s got to do it,” said David Fletcher, Utah’s chief technology officer.

Many people in similar positions in public sector organizations choose not to for a variety of reasons. Chief among them is the fear of bringing in something that fails and facing public criticism for wasting taxpayers’ money. So instead, many wait for someone else to blaze the trail and then venture along once the road is deemed safe.

For Utah, though, the thought is exactly the opposite.

“We really want to get ahead of things that we see an inevitable,” Fletcher said in an interview with StateScoop. “We saw that mobile was coming and was going to grow, so we’d rather help drive it and get the additional benefits instead of being behind.”

The Utah Professional License Lookup app was the first state-developed app in the nation when it came out in 2009. The premise was simple: Allow a quick and convenient way to check on the professional license status of doctors, nurses, contractors, accountants and any other professional offering services that require state licensure.

Fletcher said the state developed the app at that time mostly to learn about it. Through that knowledge, it has been able to build up the depth and complexity of the apps it offers its citizens, along with the ones it uses internally to help state government officials work more efficiently.

The same can be said about Google Glass. This February, Utah developed its OnTime app for the emerging technology as a learning instance for the state in regards to trending wearable technology.

Fletcher said the mobile community is one Utah pays special attention to. The state has long been known for putting emphasis on online citizen services, as they save both time and resources — citizens are able to get the services they need without tying up the time of state workers.

A huge portion of that, too, comes from mobile. Fletcher said about 25 percent of the state’s Web users, a total of about 400,000 people each month, go to the site via a mobile device.

“We want to make sure all of our assets are mobile friendly, featuring responsive design, and coming up with new applications where they can add value over simply creating a mobile site,” Fletcher said.

Next month, the state is expected to release its next mobile app, this one focused on hunting and fishing. It will allow residents to keep their hunting or fishing licenses in a mobile wallet that features a barcode wardens can scan like a paper license. It also includes hunting and fishing maps and information of different species of game.

Of course, public-facing apps are only part of the package. Fletcher said the state has increasingly relied on apps just for employees. For example, the state’s risk management team has begun using an app for the iPad that Fletcher said has been cutting down inspection time by a third.

“We’re always looking for efficiencies and apps are a place we are seeing a lot of ROI,” Fletcher said. 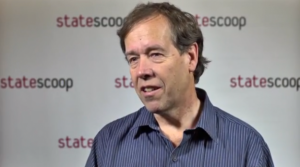