Mainframes, the giant computers that house many of state government’s most critical services, are continuing their crawl out the door, according to state technology leaders who responded to a recent survey.

Data presented by the National Association of State Technology Directors at the group’s annual conference in Big Sky, Montana, this week revealed that challenges surrounding cost and workforce are continuing to push the technology out of government.

Some surveyed said mainframes may continue to provide a viable platform, and others even said they would consider expanding their mainframe applications portfolio, but the overall numbers reveal a desire to almost fully scale back use of computing technology first popularized in the 1950s.

“We want off the mainframe,” one anonymous survey respondent put it when asked to describe their strategy.

Pat Snow, NASTD president and chief information officer for South Dakota, said this type of IT modernization is a top priority for nearly every state, and that the age of these machines has led to a new “tipping point.”

“Because of that, we have to begin to formulate a strategy to take us into that next realm of applications,” Snow said.

The data, which was gathered with help from the National Association of State Chief Information Officers and comes from 38 states, reveals both a shrinking portfolio of mainframe applications and dwindling interest in managing the technology in-house.

Today, 53 percent of state IT enterprises report managing their mainframes in-house, while just 18 percent fully outsource the service. The remainder pay for managed service, either on- or off-premise, or have some hybrid solution. But when asked about their plans for the future, 61 percent of IT leaders said they are looking to fully outsource or use a hybrid approach, while just 18 percent said they plan to continue managing their mainframes in-house.

“I was a little bit surprised to see that dramatic shift,” Snow said.

The report provides an overview state IT’s mainframe landscape today. IBM, for example, is the leading vendor for states that use outsourced or managed mainframe services, as it holds contracts with five states. Vendors such as Unisys, Atos, and Ensono trail in the market with two contracts each.

Though cost is one of the main factors driving states away from mainframes, partnering with other states to share resource costs on mainframes proves unpopular — only 5 percent of respondents said they have such an arrangement. When asked if they would consider such an cross-state agreement, 71 percent said they have no plans to do so, while 24 percent said they were uncertain about such deals.

Snow said one of his hopes for future NASTD research is that states will share their best practices on this rare type of partnership, with the hope that it will encourage further collaboration in the future.

Indeed, rising costs for the few agencies left on mainframes, sometimes referred to as the “last man standing” scenario,” is a key concern for states. One survey respondent called the arrangement “untenable.”

“Cost is an issue,” another respondent said. “As the number of agencies using the mainframe has shrunk, costs for each agency have increased.”

Eric Larson, chief information officer for the state of Florida, told StateScoop his state is currently searching for a solution to the last-man-standing problem as more services are transitioned off the mainframe. Florida’s Agency for Technology Services, which did not participate in the NASTD survey, is currently seeking authority to transition its mainframe to a cloud-based model, he said.

“Going with [a subscription-based] model from a provider provides some buffer to mitigate that change in budgeting that happens as agencies modernize their applications,” Larson explained.

In the current cost-allocation model, he said, it’s a race off the mainframe that punishes the slowest agencies, which are often those whose services are the most critical and most entrenched in government’s legacy systems, such as public assistance eligibility systems .

“It’s really the applications that were first automated with computers when computers were new and horribly expensive,” Larson said.

There were several common reasons cited for why applications have remained on mainframes, such as uptime reliability requirements for mission-critical systems and the advantage of platform security, but the main reason mainframes are still in use today, cited by 95 percent of respondents, is to support legacy applications.

And one-by-one state agencies are opting for more flexible and inexpensive options as they transition off mainframes. Sixty-three percent of IT leaders said that just 10 or fewer agencies are left using mainframe services managed by a central IT organization.

And while the push away from the technology is clear, both by state IT policymakers and those who manage the technology’s day-to-day operations, Snow says mainframes will probably never disappear from state government completely.

“There are pockets of applications that really make sense for that platform and there will always, I think, be a place for that,” Snow said. “It may not look like what it looks like today, and that term, [mainframe,] may fade a little bit, but that function I don’t think will.” 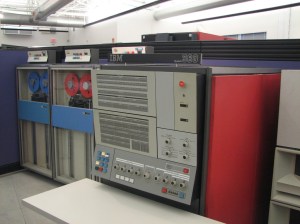 State technology offices continue pushing away from the mainframe