Philadelphia’s Office of Innovation and Technology released a report on Tuesday that outlines the city’s path to grow into a “smart city,” along with Mayor Jim Kenney announcing the establishment of a public-private advisory committee to facilitate the transition.

The “SmartCityPHL” Roadmap is a 25-page guide and timeline for the city’s ongoing and future tech-based projects, two years in the making for Kenney and the dozens of city departments that contributed to the report. It serves two main purposes, according to city Chief Information Officer Mark Wheeler and Smart City Director Ellen Hwang: to document and inventory the work that Philadelphia has already done in building a foundation for an innovative city, and to launch the city into a future free from the mistakes plaguing many other “smart city” projects around the country.

The report outlines three strategies for the city to take: creating a foundation, establishing engagement and sustaining implementation. Creating a policy and infrastructure-based foundation is the first step — something Wheeler and Hwang say Philadelphia has largely accomplished already through the previous inventories, updating the city’s data-sharing and interoperability policy and establishing ownership of cell towers serving the city.

“We want to be able to come to people, or solution providers with [the report] and say ‘you don’t need to create something out of whole cloth — you don’t need to treat us like we’re a blank slate,'” Wheeler told StateScoop. “In fact, we want to be able to describe a problem, and ‘here’s all of the assets we think are valuable, but here’s a complete inventory in case we’re missing something.'”

The second strategy outlined in the report — creating a process for engagement and partnership — is meant to fill the city’s gaps in its foundation. “Strategy 2 is the new kid on the block,” Hwang said.  The city is placing an emphasis on governance that it didn’t have before when considering innovation — and Hwang said it will separate Philadelphia from other innovative cities.

“The focus on governance is important because that’s what jams every other city up,” Wheeler said. “[Other cities] tend to look at it as ‘we’re getting an investment from a private company… what type of successes can we build off of that?’ But the thing that they don’t do is structure smart city in their government operation.”

For Philadelphia, that will mean thinking carefully about how an innovative solution affects all its residents, Hwang said, and how different departments can create those solutions together instead of “unitasking.”

“Are you going to let vendors come in and pick off departments one at a time, so when you need resources from each other, you’re already over-allocated and under-resourced in these areas?” she said.

Proper governance will ensure projects are made collaboratively across departments, Hwang said.

“It isn’t just about mobility, it isn’t just about public health — it’s like, how do all these specific topic areas within smart cities tie together and how do we as an IT department better support the foundation to build all those different initiatives?” Hwang said.

The city’s new external advisory committee will play a large role in fostering that collaboration. Comprised of 20 members from public, private and academic sectors, they’ll work to identify partnerships and advise on key technology decisions for the city. An internal working group will also advise the city’s efforts, while Hwang’s duty is to “carry out the vision” of the SmartCityPHL initiative.

Sustaining innovation is the third and final strategy outlined in the report. The projects the city is already working on include a multilingual voice platform, an application to increase the efficiency of snowplowing, and energy initiatives for its largest buildings.

The report was funded by a $200,000 grant from the Knight Foundation and created with help from Guidehouse, a public sector consulting business. 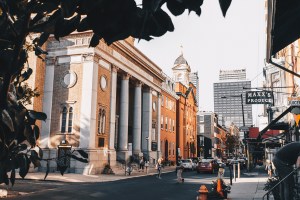