In New York City, you don’t need to have a computer science degree to be a “data person,” according to Zachary Feder, the open data program manager at the Mayor’s Office of Data Analytics. You just need to be conscious of your community.

Feder, along with representatives from 19 other city agencies and community organizations, helped organize hackathons, surveys and other presentations in New York City communities for the city’s fourth annual NYC Open Data Week earlier this month. Previous editions of the conference have helped spark an artistic culture around the city’s nearly 3,000 open data sets, but Feder told StateScoop that this year, increasing civic engagement with open data — an element of New York City’s 10-year Open Data Plan published last September — was the main goal.

“Really, how do we take the people who don’t think of themselves as data people and communicate that, A, they’re using data all the time, and B, how that information can be important for their daily lives?” Feder said.

In addition to events hosted by NYC 311, Cyber Command and other city agencies focused on digital services, Feder said the city also helped organize events that were hoped to bring out community members to experience data-collection and analysis firsthand.

One of these was a hackathon built around understanding pay parity as it relates to gender, held by a women-owned data analysis company called LYLAS, which stands for “Love Ya Like a Sis.” Another, more whimsical event invited New Yorkers to be “squirrel sighters” for a day, collecting data and building a profile of New York City squirrel breeds and populations.

“There were a few events where maybe people don’t think of themselves as data people, but they have real questions and real problems to solve,” Feder said.

While the city employs open data coordinators to serve as in-house data stewards for city agencies, publishing data is only the starting point.

“There’s a lot of internal use by the city, and there’s a lot of work that we can do to foster more use by the public and by different communities,” he said. “The principle of our open data program is open data for all, and these events are another example of that.” 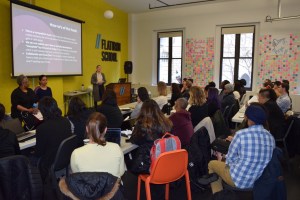 From pay gaps to squirrels, NYC seeks topics to hook public on data