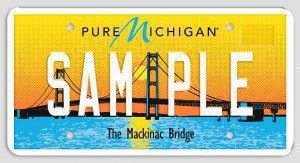 Since 1970, ALPCA has recognized the state or province with the best new license plate design of the year. Effective last year, all plates of the world were eligible for the contest.
Michigan’s plate was selected as the winner from among 12 finalists by ALPCA members for only the second time in the contest’s distinguished history. In 1976, the state’s red, white and blue bicentennial plate earned best new plate honors.

ALPCA members worldwide were asked to nominate and then vote on the best new plates based in part on the overall attractiveness of the license plate design. “I knew it had an excellent chance of winning the moment I first saw it,” said Gus Oliver, ALPCA’s Best Plate Award Coordinator.

“We’re delighted that ALPCA has honored Michigan with its plate of the year award,” Secretary of State Ruth Johnson said. “The Mackinac Bridge is a spectacular example of the many things that make our state such a special place. It represents what we call ‘Pure Michigan,’ and when people see it on our vehicles, we hope they will consider it an invitation to come and explore the Great Lakes State.”

The Mackinac Bridge plate was designed by Brian Whitfield, a Michigan Department of Transportation employee. It is available for new registrations and as a replacement of a current tag for an extra, one-time cost of $5. To date, more than 112,000 have been sold.

“Millions of people have experienced the awe and wonder of traveling across the Mackinac Bridge,” said William Gnodtke, chairman of the Mackinac Bridge Authority (mackinacbridge.org). “It is an iconic and inspiring structure that is one of the world’s great engineering feats. We are pleased to learn the license plate that features it has received this acclaim.”

Pure Michigan is the brand representing business, talent and tourism initiatives across Michigan. These efforts are driven by the Michigan Economic Development Corporation, which serves as the state’s marketing arm and lead advocate for business growth, jobs and opportunity with a focus on helping grow Michigan’s economy. For more on the MEDC and its initiatives, visit: michiganbusiness.org. For Michigan travel news, updates and information, visit michigan.org.

Founded in 1954, ALPCA currently has over 2,700 members and is the world’s oldest and largest nonprofit organization devoted to researching, collecting, and promoting license plates. For more information on ALPCA and collecting license plates visit ALPCA.org.