Officials in Cook County, Illinois, on Monday released an interactive map based on five years’ worth of socioeconomic data that they hope will aid in their efforts to achieve equity in access to local resources.

The “Everyone Counts” map uses data collected between 2015 and 2020 by the U.S. Census Bureau’s American Community Survey and allows users to view fluctuations in education levels, employment, income, housing and transportation by percent change per census tract. It’s an update to a map published in November 2021 that only showed population shifts — with regard to age and race or ethnicity — based on differences between the 2010 and 2020 censuses.

Getting a clearer view of socioeconomic trends is important for policymakers in Cook County, which includes Chicago and its suburbs, in identifying where investments are needed to improve access to resources like education, language assistance and housing support. The ACS data in the new map, officials said, provides a more in-depth look at the challenges specific communities are facing.

Narrowing the focus from the original map’s 10-year span down to a five-year range that can be updated regularly was also important for more closely targeting those needs, said Todd Schuble, Cook County’s director for geospatial information systems.

“With the five-year data as opposed to the 10-year data, you’re getting sort of a tighter window to look at the changes that are happening on the ground,” Schuble told StateScoop. “So for instance, you know, if you compare say 2010 to 2020, that’s 10 years apart. 2023 is right around the corner, now you’re looking at essentially data that’s 13 years old. And so you want something that’s going to be more effective in that way, if you have that tighter window with a five-year window, as opposed to a 10-year window, it’s going to be something that, in my opinion, would be more actionable.”

While the nationwide census only occurs once a decade, the American Community Survey interviews millions of households on socioeconomic and demographic factors every year. Cook County Board President Toni Preckwinkle told StateScoop having that granular data will give local leaders not just a better look at where needs are greatest, but if government investments are having an effect.

Along with providing the raw data reflecting socioeconomic changes, the “Everyone Counts” map aims to make identifying those trends easier by providing visualizations that show percentage changes for various statistics — including age, race, educational attainment and income — in census tracts across Cook County. The visualizations appear as circles overlaying the county map, indicating increases or decreases based on size and color, as well as bar graphs depicting the same changes between 2015 and 2020.

‘More livable for all’

In a press release, Cook County CIO Tom Lynch said the map is designed to be usable by government officials, policy organizations and residents.

“The U.S. Census Bureau puts out a tremendous amount of data, but it can be difficult to parse even for subject matter experts,” Lynch said. “We hoped to really unlock the potential for smaller government entities, non-profits, community organizations as well as for anyone who happens to be curious about how their neighborhood has changed in the last few years.”

The map is viewable in English and Spanish and is designed to work on both desktop and mobile devices, county officials said.

Denise Barreto, Cook County’s director of equity and inclusion, said the drive behind making this data accessible to the public was to further an effort to make “Cook County a place where everyone counts, and is more livable for all.”

“We are taking a huge step toward my goal as a coach and facilitator of this work, and that is to operationalize thinking about equity and spreading the ownership within all within all the halls of Cook County government and beyond,” Baretto said Monday. 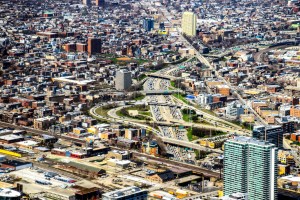