Ohio Gov. Mike DeWine on Monday visited the Miami Valley Regional Crime Lab, one of 14 forensic labs throughout the state that are receiving a total of $10 million in new funding.

The Miami Valley lab, based in Dayton, plans to use its $1 million grant to reduce backlogs in its chemistry and DNA divisions, add new staff and purchase new hardware and software to boost capacity, according to DeWine’s office. The new funding, announced last month, is a response to forensic toxicology and pathology backlogs that stacked up across the state during a surge of violence that followed the start of the COVID-19 pandemic.

Forensic labs began struggling to process evidence and analyze samples returned from crime scenes when violent crime spiked in 2020, according to DeWine’s office. FBI data shows there were 21,570 murders in 2020, a 30% rise over 2019, and a return to levels not seen since 1997. 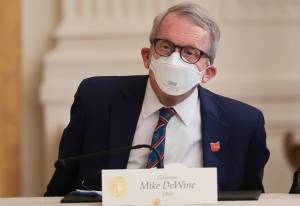