Illinois acting Chief Information Officer Jennifer Ricker told StateScoop that although the state’s data center modernization project is at least two years away from being completed, agency leaders are already excited with the potential it holds in improving how they deliver services.

Gov. J. B. Pritzker earlier this month announced the state spent $1.55 million on nearly 10 acres of land in a business park in Springfield. And the state last April selected an architectural design firm, which is set to build a Tier III facility — defined as having less than 1.6 hours of downtime annually. According to a state press release, the new location offers access to a fiber network and “synergies to nearby State offices.”

Ricker said the state’s existing facility, though a consolidated data center, was built in the 1970s and can’t handle the needs of modern technology.

“There’s a lot about it even logistically that doesn’t work well,” Ricker said. “In the past you had storage and backups and things that were on magnetic tape and now there’s solid-state drives and we have hyperconverged [infrastructure] and those are much denser and with raised flooring and all of those things. They also run a lot hotter so there’s even a challenge [with] the cooling and everything that comes with that.”

Ricker said projects like this one are central to the work of state agencies, which are pushing to improve their digital services. And while modern infrastructure can help agencies improve their service offerings, it takes skilled data scientists to understand how to analyze data and apply it to their businesses, she said. In Illinois’ case, this means state Chief Data Officer Dessa Gypalo, whom the technology department hired last April.

“There is a lot of foundational work that has to be done,” Ricker said. “It’s not as easy as ‘let me pull out this data and there’s magical insights from it.’ We really rely on that [CDO] position to guide the organization. All of the agencies we work with and support are really excited about the opportunity, the possibilities of using the data that they are collecting to do a better job at understanding how to come up with better policy decisions and in some cases how to get better outcomes.”

Ricker said smarter use of data can also enable her department to improve on its main mission — supporting other agencies with technology.

“We’ve started to make better use of things as simple as dashboards or service metrics that they’re able to both present in a dashboard format and sometimes graphically to help share with the agencies we support what we’re providing to them,” she said. “In addition it helps us make decisions on where we’re missing our marks that we’ve established in terms of our own service metrics. It gives us the ability to take that data, use it for our own purposes but also share with the agencies how we’re doing serving them.” 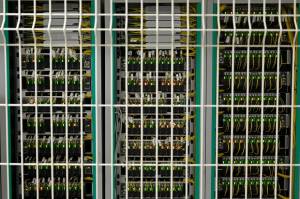