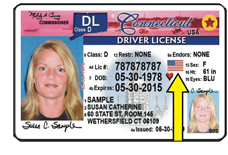 Connecticut is allowing military veterans to have an American flag placed on their driver’s license to designate veteran status.

The insignia is designed to help businesses and service providers establish eligibility for various discounts, programs and services available to veterans.

“We created this program to improve the delivery of services and benefits to the brave men and women who have selflessly served our nation,” Connecticut Gov. Dannel Malloy said. “We want to ensure that the verification of their veterans’ status is as simple as a check of their driver’s license.”

While the program officially launched last year, Malloy and leadership from Connecticut’s Department of Motor Vehicles and Department of Veterans Affairs wanted to further promote the project.

In 2011, Malloy signed legislation that requires the DMV commissioner to include a person’s status as a veteran, if applicable, on his or her state driver’s license or identity card.

The person must submit a request to have this status included to DVA, which then must verify the status no later than 30 days after receiving the request.

Once DVA verifies the requestor is a veteran through a DD Form 214 Discharge Papers and Separation Documents, DVA will electronically notify the DMV commissioner of the person’s request and its verification prior to the driver’s license or ID card being issued.

“So many of our veterans face enormous economic challenges when it comes to readjusting to civilian life, and this is a small but important part of our effort to make that transition as easy as possible,” said Lt. Gov. Nancy Wyman.  “I commend the businesses that are now honoring this program and urge all others to please consider doing so as a tribute to the sacrifices that these men and women made for our state and our nation.”

Businesses that offer discounts and other services for veterans should rely on the flag symbol on drivers’ licenses and ID cards as sufficient identification for veteran status.

The program also extends a free lifetime pass for state parks, forests, and recreational facilities to any resident who is a disabled wartime veteran, as defined under state or federal law.

by Colin Wood • 14 hours ago
Cybersecurity

by Benjamin Freed • 2 days ago
Cybersecurity