The organizers behind a nationwide police misconduct database named for the late congressman and civil rights leader John Lewis said Monday that the project will launch for public use this fall. But law enforcement agencies won’t be using it until next year to potentially inform their hiring processes, according to a press release from the University of Southern California, where the database is being developed.

Instead, the Law Enforcement Work Inquiry System Registry, or LEWIS, will be open for the public to search this year. Named after Lewis, who died July 17, 2020, the database is designed to pull together public records for officers who were terminated or resigned because of misconduct including excessive use of force or domestic violence. The database is intended to shed light on “wandering officers,” where an officer dismissed for misconduct is hired by another department.

The database, which is being led by the Safe Communities Institute at USC’s Price School of Public Policy, is intended to allow users to easily search officers in the community for previous misconduct. A beta phase, for law enforcement, is scheduled for early 2022,. The information housed in the database will also inform research on police misconduct and inform policy, according to the project’s executive summary.

The LEWIS Registry will also honor current or former law enforcement officers who have “intervened, called out, or reported corruption or misconduct at great risk to themselves or their livelihood,” with an annual Founders Humanitarian Award, according to the press release. That award’s 2021 recipient is Frank Serpico, a supporter of the registry who famously revealed wrongdoings in the New York Police Department in the 1960s. 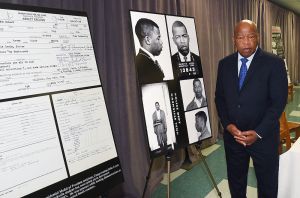