The National Telecommunications and Information Administration on Thursday announced another batch of broadband planning grants from the Biden administration’s “Internet for All” program, totaling nearly $67 million for 11 states and Washington, D.C.

The announcements were the latest awards to come out of the $45 billion fund, which was created as part of last year’s infrastructure spending law. With Thursday’s awards, the NTIA has distributed nearly $150 million to 27 states and D.C. under the program.

The grants draw on two components of the “Internet for All” program: the $2.5 billion Digital Equity Act, and the $42.5 billion Broadband Equity, Access and Deployment fund, the bulk of which will be distributed next year.

The states included in Thursday’s funding announcement were Alaska, Arkansas, Colorado, Kentucky, Maine, Missouri, North Dakota, Pennsylvania, South Carolina, West Virginia and Virginia, in addition to D.C. The awards ranged between $2.9 million for Missouri and $6.6 million, which went to Pennsylvania.

“Pennsylvania’s lack of affordable, accessible broadband is one of the biggest challenges holding our economy back,” Pennsylvania Gov. Tom Wolf said in a news release. “This $6.6 million is the beginning of a generational change waiting for Pennsylvanians. With guidance from the Pennsylvania Broadband Authority, distribution will be carefully targeted for guaranteed progress.”

Pennsylvania officials last week publicized the commonwealth’s plans for how it’ll make use of the grants, including the hundreds of millions of dollars it anticipates receiving in its full BEAD award next year.

Separate from the “Internet for All” awards, the U.S. Treasury announced Thursday that Colorado and New Mexico were approved to receive a combined total of $288 million for broadband deployment through the American Rescue Plan. According to a news release, those funds will help connect an estimated 60,000 homes and businesses to affordable, high-speed internet. 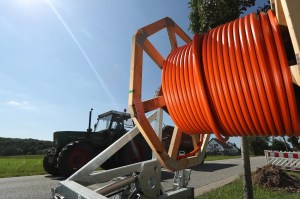