The LA Secure app — which is backed by the City of Los Angeles and the Los Angeles County Metropolitan Transportation Authority — is the latest in a series of smartphone apps rolled out by state and local governments aiming to improve their constituents’ cyber hygiene. It follows similar products offered by New York City, which launched its app in 2018, and Michigan, which released its app last February.

Like the NYC Secure and Michigan Secure apps, LA Secure was built by Zimperium, a mobile security firm in Dallas. Its creation had been in the works for some time though, said Dave Anderson, LA Metro’s senior director of IT. Anderson said the app is an expansion of an effort that began in 2018, when the authority started outfitting its 2,300 buses with on-board Wi-Fi.

“A lot of our customers were going to sites while on the surface were perfectly harmless, a lot of the links buried on these sites were not,” he told StateScoop. “We didn’t have a mechanism for filtering them out other than blocking them entirely.”

At first, LA Metro implemented security measures with in-house solutions, including DNS filtering and blocking explicit or pornographic websites. (“We have minors on riding our buses,” Anderson said.) But Anderson also said his team was interested in developing a product that could be installed “on the host device” — an app that individual users could download — especially as daily ridership on LA Metro’s buses and trains peaked.

“A lot of people who didn’t have to ride the bus stopped riding the bus. But the transit-dependent continued to,” he said.

The general increase in dependency on mobile devices to conduct everyday transactions was also a factor, Anderson said.

Similar to the New York City and Michigan apps, LA Secure sends users an alert if it appears they’re connecting to a “rogue” Wi-Fi network or clicking on a suspicious link.

And though it began as an LA Metro project, the City of Los Angeles joined in through Mayor Eric Garcetti’s membership on the transit authority’s board, Anderson said.

LA Metro’s ridership has recovered over the course of 2021, with daily bus and rail boardings now at about two-thirds of the 1.2 million who rode daily before the pandemic. But the transit agency has lofty goals for its new app: “When we went to acquire this product, the price point in the number of downloads worked best at the 3 million mark,” Anderson said. “We clearly don’t have that many customers, but it made sense.”

By comparison, through March 2021, NYC Secure had been downloaded about 150,000 times, according to New York officials. 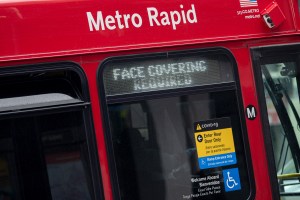