After days of nationwide protests against police brutality following death of George Floyd, an unarmed black man who was killed while in custody of the Minneapolis Police Department, the Los Angeles Board of Police Commissioners held an all-day video call on Tuesday that LAPD Chief Michel Moore called “unorganized.”

The meeting, held virtually Tuesday morning over Zoom, to adhere to coronavirus pandemic safety guidelines, was initially capped at just 500 participants, including city residents or members of the media who’d phoned in. For more than 45 minutes after it started, the public meeting — which is normally held weekly in Los Angeles Police Department headquarters — remained inaccessible to all but the first 500 people to register.

“The issue is that the Zoom account is full, the city council phone is ringing busy to people because its apparently at its capacity,” LA BOPC executive director Richard Tefank said about 25 minutes into the meeting. “So we’re receiving inquiry from the media that they can not get to the meeting.”

LAPD commissioners initially said they were intent on staying until they’d heard every public comment, but considered cancelling the public comment period altogether. But nearly an hour into the meeting, Zoom emergency-upgraded the city’s license to allow all participants to join and comments from irate members of the public resumed.

Tefank, along with his fellow commissioners, seemed unaware of the limits of the city’s Zoom software license prior to members of the press informing the LAPD they weren’t able to access the call. Prior to the Zoom license upgrade, Commission President Eileen Decker said she was “profoundly sorry” for the technical difficulties.

“It’s ridiculous that we can’t get everybody on,” she said.

“Can you please find out from IT if there’s any way to increase the number of people who are allowed to be admitted?” Decker asked city attorney Mike Feuer. “That may mean changing our licensing requirements. I don’t know if that minutes, days or hours. If it could be done, let’s make that ask.”

The problem wasn’t “rocket science,” said Commissioner Steve Soboroff, adding that most of the commissioners have kids who probably could have solved the capacity issue “in five minutes.”

Jessica Craven, an elected member of the Los Angeles County Democratic Party, who called into the meeting, told commissioners the event was “wildly frustrating.”

“I know that you have all apologized, but I have to say the fact that you did not foresee having more than 500 come to this meeting is a sort of breathtaking lapse in responsibility and emblematic of the larger problem, which is that I don’t think you really all do want to hear from us,” Craven said.

The purpose of the meeting was to allow the public to comment on recent police activity, including comments by Moore, who on Monday said that protesters around the country have as much “blood on their hands” for Floyd’s death as the Minneapolis police officers.

Moore started the meeting with a review of current police activity, which included a tally of 27 injured Los Angeles police officers, two of whom have been hospitalized. He also apologized for Monday’s comment.

“I made a terrible mistake and misspoke in regard to the death of George Floyd,” Moore said.

As for the problems with the meeting itself, Moore was less apologetic.

“It’s an effort to ensure that we’re as transparent as possible,” Moore said. “That’s our responsibility and our obligation. As unorganized as this may be, its an effort to actually deliver.” 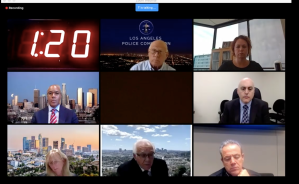