State governments have long struggled to fill information technology jobs , but a new nonprofit group is trying to turn that around with a new crop of professionals.

Govern for America is preparing to place its inaugural cohort of fellows across state governments next summer as the first component in what the organization’s founders envision as a desperately needed pipeline for fresh talent. By building a network of partners across universities and government agencies, the mission is to help usher in “the next generation of civic leaders,” Octavia Abell, the group’s co-founder and chief executive, told StateScoop.

The program draws heavily from the experience Abell, 26, gained while serving as the director of strategy for Rhode Island’s Office of Innovation alongside former state chief innovation officer Richard Culatta , who is now one of Govern for America’s advisers. Rhode Island’s innovation office runs an array of programs, including its own Government Innovation League , a leadership development program designed to get middle managers thinking differently about how to meet their goals while also building new collaborations across state agencies that may traditionally have had little interaction.

“What we found is we were able to activate individual leaders as change-makers but what that process wasn’t as successful at doing is driving the broader culture shift in changing the way agencies are approaching problems and trying to develop solutions,” Abell said.

Young talent could help drive the broader culture shift toward innovation that many states seek, but like all states, Rhode Island struggles to compete with private industry. State jobs don’t pay as much and aren’t generally regarded as being very cool. And most damning, the infrastructure to move young workers into state government is broken — a situation Abell’s co-founder and chief operating officer Kyleigh Russ, 27, discovered first-hand. Russ, who studied education policy at Harvard, said she went to her university’s career services office with hopes of discovering what routes into a career as a policymaker were waiting.

“I was really surprised to learn that it’s hard for people to get into policy roles,” Russ said. “This isn’t just a Harvard thing — now that I’ve been talking to tons of career service offices around the country, it’s really hard for them to navigate the political and state and local government scenes.”

Russ said she found government hiring processes opaque and confusing. Job titles were different everywhere and their relation to a career path was unclear, such as job designations like “Special Assistant C-III.” Poorly designed local government websites were no help, and despite having what Russ characterized as a “well-connected” support network guiding her along, she was “running into roadblocks” at every turn.

But it’s not entirely government’s fault. Russ says schools deserve some of the blame, too, for not promoting public service as a career path.

“Harvard and a lot of the Ivies — and a lot of the schools in general — funnel people into consulting and banking and finance and tech,” she said. “I started thinking ‘What is this process like for people who are not well-connected? If I’m having this trouble, I can only imagine the people who are less advantaged than I am, the kind of struggles they’re facing.'”

Abell and Russ, who say they’ve built a network of more than 60 recruiting partners since founding the nonprofit about nine months ago, are designing Govern For America with these shortcomings in the pipeline in mind. Its leader network includes people from diverse backgrounds who can mentor students, and also debunk the image of state government as a workplace where workers shuffle about as they wait for retirement.

Different from other fellowships

Govern for America distinguishes itself from other fellowship programs by focusing on state government and also by not limiting the types of careers it hires for. It also differs in that Abell and Russ insist that states hire and “deeply embed” fellows as full-time state employees under existing job designations, rather than try to wait out the slow process of revising job titles.

By comparison, Code for America, an unrelated nonprofit that promotes digital government and innovation initiatives, long paired its fellows with government agencies to temporarily inject talent on individual projects, though the group did relaunch the program this spring with a more sustainable model in mind.  Groups like FUSE Corps pair mid-level professionals with local government, and there are residency and placement programs for various policy areas.

But Abell said she saw an unfilled gap in the workforce infrastructure that the state government leaders she meets with struggle to bridge. Yet it’s also one she says that young people moving back home or who interested in effecting social change can feel passionate about once they learn about it, as she did in Rhode Island.

“State government is just such an interesting layer because you have the potential to drive transformative impact for many, many people, but you’re also working at a very close and personal level at times,” Abell said. “My experience working in Rhode Island … transformed the way I thought about how I as one individual could be part of the solution and driving forward in our communities. That was something I wanted to seed and grow in the next generation to come.”

Govern for America is taking applications through October, with the first cohort of fellows to be announced in spring 2019. Abell said fellows will go through training that summer and be placed by July, but training and mentorship is designed to continue throughout the two-year fellowship.

Government as a family business

As they look forward, Russ said she and Abell sometimes talk about their pasts and how they each represent a side of the government workforce pipeline.

Abell started her journey through a family connection to former Louisiana Sen. Mary Landrieu’s failed 2014 re-election campaign. She later joined Rhode Island Gov. Gina Raimondo’s policy team, which advised the creation of the innovation office that she would later join.

A combination of a family that emphasized the importance of public service and attendance at a high school that promoted the idea of converting social good will into action were formative, Abell said. During her senior year at Tulane University, she said she took a class taught by political strategist James Carville that inspired much of the thinking guiding her nonprofit today.

“That’s really where I started seeing domestic politics as more of the channel for the types of impacts I wanted to have in terms of thinking about how we can strengthen our institutions and see policies and government as a product of the people inside them,” Abell said.

When Russ didn’t find the inroads into education policy she sought, she instead became a teacher at Boston’s Edward Brooke Charter School.

“We always hear ‘politics is a game of who you know’ and to me it really showed that’s also what governing is,” Russ said. “The bureaucracy is also that way, and that was really disturbing to me.”

During her first year as an educator, she said, a Mexican boy in her class was deported, reminding her of the power of policy.

“He started to tell me halfway through the year that he was worried, that his family was starting to get worried about ‘immigration talk’ and that people in his neighborhood were potentially starting to leave and then one day I showed up and his best friend … was crying and he told me this student is not coming back because his family had to leave the country,” Russ said.

But more days than not, she saw the positive powers that policy could have, including her own school’s resources providing high-quality education to students who wouldn’t have had access otherwise. Getting people who are passionate about different topics the way she is passionate about education and putting them into roles in government where they can create change, she said, is why they made Govern For America.

At the request of Code For America, this story was updated on August 10, 2018 to point out that Code For America recently relaunched its fellowship program to have a more sustainable impact on government. 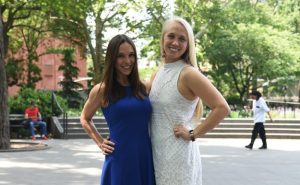