The Indiana Office of Technology on Wednesday announced the launch of a new digital map that makes it easier to find information about all 92 of the state’s county sheriffs. The portal is intended to provide the public a single authoritative source of contact information that was previously scattered across the internet, but it also represents an early step by Indiana to help its local governments improve the usability and security of their websites.

A new webpage hosted on IN.gov contains a map that allows users to click on counties and find the addresses, phone numbers and websites associated with each sheriff. Graig Lubsen, the Indiana Office of Technology’s communications director, told StateScoop that collecting information on sheriff’s offices was viewed as a logical first step as the state encourages local governments to use its website services.

“[White] researched existing sheriff websites and we found dot-coms, dot-us, dot-gov, Facebook, dot-org,” Lubsen said. “It was all over the board and it took him quite some time to be able to track down the 92 different sheriff’s offices and make sure they’re legitimate. So we kind of thought why don’t we make an easy-to-use portal?”

Some sheriff’s offices, like Vigo County’s, have already taken the state up on its offer to use the state’s dot-gov domain. The Morgan County Sheriff’s Department went a step further, using the state’s tools to create a website that matches the appearance of the state’s website and now enjoys the same level of security.

“They would use our common content management system and be able to access a lot of the IN.gov tools we offer to agencies, including Google Analytics, tools to check for broken links, misspellings, all these other things we already offer to agencies we’d be able to offer to local governments,” Lubsen said.

The General Services Administration charges an annual $400 fee to hold a .gov domain. In addition to saving on that fee, local governments that use the state’s website services also enjoy the security perks of the .gov domain, such as active vulnerability monitoring and multi-factor authentication.

“We test our site constantly for user experience, so we know that the towns then are going to have a good experience,” Lubsen said. “We’re going to in many cases be able to save them money. We will also make sure it’s up-to-date on security practices and do our best to make sure we don’t get any cybercrime going on on the local government level. We’ve seen that in some county sites before in Indiana, so we can offer at least a little bit more protection.”

Indiana’s effort aligns with one of the “federal advocacy priorities” of the National Association of State Chief Information Officers, which is to encourage wider adoption of the .gov domain. The group last year endorsed bipartisan legislation that would direct the Department of Homeland Security to help local governments migrate to the .gov domain. Although the U.S. Census counts nearly 39,000 local governments, fewer than 5,000 non-federal government organizations use .gov addresses. 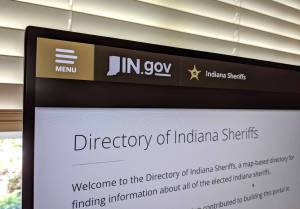